1000 km electric car is coming, stylish design has many features 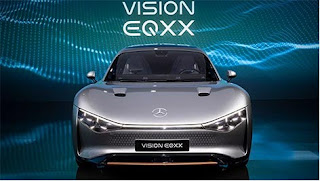 According to the company, the EQXX concept consumed 8.7 kilowatt hour (kWh) of energy per 100 kilometers and completed the journey in 11.30 hours. The company says that the EQXX concept is twice as efficient as other electric cars from Mercedes and even surpasses the Tesla Model S in the range.

Mercedes-Benz’s Chief Technical Officer, Marcus Schaefer, said that its efficient design is a key factor in the EQXX concept range. He said that the team developing this car is working on making it more energy efficient. Efforts are being made to limit the energy consumption of this electric car to 10 kilowatt hour (kWh) per 100 km, which could increase its range in the production model.

The company had unveiled the EQXX concept in January this year. According to the carmaker, the electric car has a battery half the weight of the Mercedes-Benz EQS but is capable of delivering more than twice the range of the EQS.

Apart from this, to keep the weight of this concept electric car down, light weight materials like magnesium alloy wheels and carbon reinforced door panels have been used in it. The curb weight of this electric car is 1,750 kg, which is lighter than a normal four seater sedan.

This concept electric car is equipped with a 900-volt battery but it is 50 percent smaller in size and 30 percent lighter in weight than the battery of the EQS 450 Plus. Its roof has very thin solar panels which keep the car charged in the sun. With just the charging of the solar panel, it can give a range of 25 km.

Let us tell you that the Mercedes-Benz EQS has been the company’s highest range electric SUV so far. It runs up to 652 kms on full charge. The company has launched it against the Tesla Model S Long Range. However, electric cars offering a range of 700 or above are very few in the market.

Companies like Mercedes-Benz, Tesla and Neo have entered the race for electric cars that offer the most range. The companies believe that the high range electric cars will eliminate the worry of short range and lack of charging infrastructure and they will also be used as normal as petrol cars.